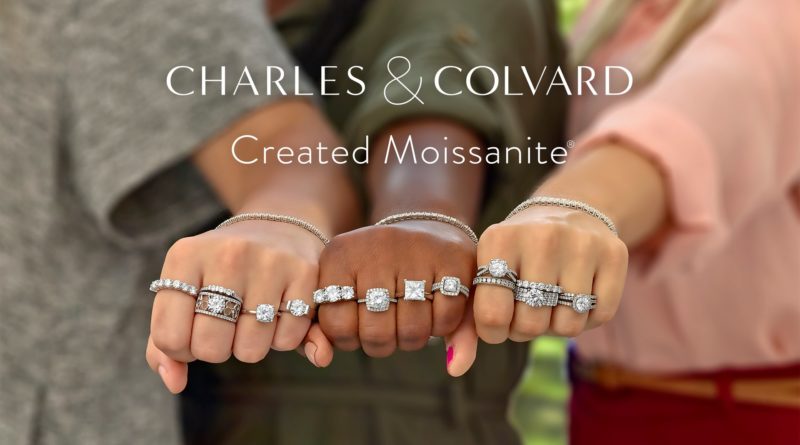 Moissanite is a rare, naturally occurring mineral also known as silicon carbide, which was first discovered by the Nobel Prize-winning chemist, Dr. Henri Moissan, at the site of a massive meteorite strike in Arizona. This intriguing new stone was named “moissanite” in his honour.

It wasn’t until the late 90s that scientists–working in a research laboratory located in Research Triangle Park, North Carolina–developed the innovative thermal growing process that creates silicon carbide crystals. These crystals are fashioned into moissanite gemstones that rival any natural gemstone for fire and brilliance. These man-made gems are more durable than any other popular gemstone such as diamond, sapphire, ruby or emerald.


IS MOISSANITE A BRAND OF DIAMOND OR A SIMULATED DIAMOND?

No. Moissanite is not a substitute for diamond, either scientifically, chemically or emotionally. Charles & Colvard created moissanite is a unique gem with its own set of chemical and optical properties that exhibit more fire and brilliance than any other gemstone.

HOW DOES CHARLES & COLVARD CREATE MOISSANITE?

Charles & Colvard is the original creator of moissanite. The process is lengthy, complicated and expensive, which limits the output—it takes two to three months for the creation of a single gem. Charles & Colvard’s manufacturing process and years of expertise in creating the gemstone currently makes us a leading source and global distributor of created moissanite.


IN CREATING MOISSANITE, WHAT STEPS ARE TAKEN TO ENSURE THE PRODUCT IS OF THE HIGHEST QUALITY?

Years of development have led to a rigorous production process, which follows exact specifications and very high standards of quality control.

Post production, all created moissanite undergoes stringent testing for quality and purity, along with numerous rounds of grading before being released for sale.


IS MOISSANITE AN IDEAL CUT STONE?

Carefully and precisely faceted, each Charles & Colvard created moissanite gemstone is cut according to exact angles and proportions specific to moissanite. When cutting moissanite, precision is critical to maximizing its brilliance and enhancing its incredible fire.


HOW IS MOISSANITE GRADED FOR CLARITY?

Charles &  Colvard employs graduate gemologists certified by the Gemological Institute of America. Each Charles & Colvard gem is studied by trained grading specialists using a 10x jeweller’s loupe for any imperfections that may affect it’s optical performance.


HOW DOES MOISSANITE COMPARE TO OTHER GEMSTONES ON KEY GEMOLOGICAL PROPERTIES?

Moissanite is comparable to other popular gemstones including diamond, ruby, sapphire and emerald on key characteristics such as hardness, fire and brilliance. On the Brilliance Refractive Index, moissanite is more brilliant than any other gemstone, ranging from 2.65-2.69 on the scale. Its fire dispersion is over 4x greater than any other popular gemstone. On the MOHs hardness scale, moissanite comes in second only to a diamond, measuring at 9.25. In addition, moissanite's durability is excellent, meaning it will survive daily wear and tear.

WHAT PROPERTY OF MOISSANITE MAKES IT SPARKLE WITH SUCH EXCEPTIONAL BRILLIANCE?

The most significant optical property affecting a gemstone’s brilliance, or sparkle, is the brilliance refractive index or BRI. The BRI of moissanite ranges from 2.65 to 2.69, meaning it displays more brilliance than diamond (with a BRI of 2.42) or any other popular gemstone.


WILL THE BRILLIANCE OF MOISSANITE EVER FADE?

WHAT GIVES MOISSANITE ITS FIRE?

A gemstone’s fire is determined by a gemological property called dispersion. Dispersion refers to the prism effect that occurs when pure white light enters a non-opaque object, breaks into spectral (rainbow) colors, and reflects back to the viewer. Moissanite’s dispersion is 0.104, which exceeds that of any gemstone including diamond, ruby, sapphire and emerald.

DO OTHER GEMSTONES HAVE MORE FIRE THAN MOISSANITE?

Moissanite's fire exceeds that of any popular gemstone, including diamond, ruby, sapphire and emerald. Fire can be measured scientifically; with a dispersion of 0.104, moissanite has 2.4 times the fire of diamond. No other gemstone or jewel compares to Charles and Colvard Created Moissanite® with regard to fire.


WILL A MOISSANITE GEMSTONE EVER LOSE ITS FIRE?

WILL MOISSANITE FADE OR CHANGE COLOR OVER TIME?

No. There are no likely situations in which the colour of moissanite will be permanently changed. Moissanite does undergo a temporary colour change when exposed to extreme heat from a jeweler’s torch during jewellery repair, but with proper bench techniques there will be no lasting damage and the stone will return to its normal colour once it cools.


IS MOISSANITE GRADED ON THE GIA DIAMOND COLOUR GRADING SCALE?

Moissanite grading uses a color grading scale that is based upon the GIA diamond colour grading scale. There are three grades of moissanite available today: colourless (D-E-F range), near-colourless (G-H-I range) and with faint hues of colour (J-K range).


DOES MOISSANITE HAVE INCLUSIONS?

Yes. Moissanite can have needle-like inclusions that can be seen under 10x magnification. They are not visible to the naked eye and do not affect the clarity of the stone. It’s worth noting that nearly every gem has some sort of inclusion. They are unique to each gemstone and occur in the formation of the crystalline structure.

IS MOISSANITE RESISTANT TO SCRATCHING?

Yes. Moissanite is durable, tough and extremely resistant to scratching and abrasion. With a hardness of 9.25-9.50, moissanite is harder than all other gemstones except diamond. Charles & Colvard provides a Limited Lifetime Warranty that protects against damage to the stone.

No. Moissanite is one of the toughest known gemstones. Charles & Colvard provides a Limited Lifetime Warranty that protects against damage to the stone.

Yes. Moissanite exhibits more heat resistance than many other gemstones, including diamond. Tests prove that at 2000ºF—higher than the equivalent intensity of a house fire—moissanite gems remain intact and as brilliant as the day they were created. This heat tolerance makes moissanite unlikely to suffer damage during jewellery repair.


WHAT IS THE DIFFERENCE BETWEEN FOREVER ONE ™, FOREVER BRILLIANT® AND FOREVER CLASSIC™ MOISSANITE?

Charles & Colvard Forever One moissanite is a triumph of art, science and sustained effort. The structural configuration of this specific moissanite material is what yields its unsurpassed, colourless (D-E-F) quality. While chemically it is still silicon carbide (SiC), and its optical and hardness properties remain the same, it is the stacking of SiC material in the manufacturing process that makes Forever One moissanite unlike any of its predecessors.

Through its research and development efforts working with Forever One, Charles & Colvard developed a second grade of Forever One, in G-H-I quality. Boasting the same optical properties of our DEF quality moissanite, this near colourless gemstone emits a faint, icy hue compared to its Forever Brilliant predecessor, which yields a warm hue.

*Based on the Gemological Institute of America's diamond grading scale.

WILL MOISSANITE RETAIN ITS VALUE OVER TIME?

Due to its rarity and unrivaled beauty, Charles & Colvard created moissanite is expected to retain or increase its value over time.
STORE